A follow up on the mushroom project I had before Christmas.

I ended up with two editions of this picture, because the pen i drew the first one with wasn’t waterproof (I found out after I was finished). I wanted to use watercolour, so I drew one more. I used ink and dip pen, which gives nice and organic lines. I also got to correct the mistakes I did on the first one. Plus, I had a kozy time with the colouring, joined together with classmates: pizza, beer, music, talking, drawing and watching wierd stuff on youtube. It was a win win situation.

Have a nice day and all that 🙂 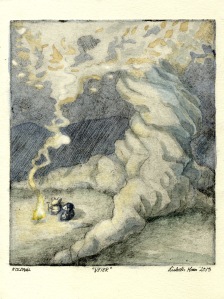 Graphic printmaking. Drypoint on zinc and copper. The first print I made with the mice and tree wasn’t dark enough. I coloured it using watercolours, quite satisfied with the result. Yeah…and I have read Mouse Gard, so I guess I’m inspired by it.